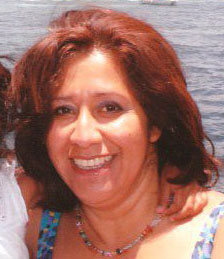 Two generations of the Guzman Ramos family—Estela and her two daughters—are community activists in the Mission and Excelsior districts. Their commitment to grassroots social change is rooted in their immigrant experience and in the fights for social justice in Estela’s native Central America.

I’m from El Salvador. I came to the US in the 1980s during the war. I was a teenager, I witnessed so much of the war. I saw horrible stuff. I also saw poor people organizing and fighting back. So much courage.

That’s a big part of my becoming political without even knowing it.

I am a mom of two beautiful daughters. One in college, Alex, who is so aware. I am so proud. She learned through her dad and me how important it is to be part of the community. And one beautiful lovely girl who is in first grade. Ariana learned to sing “El Pueblo Unido Jamas Sera Vencido” at a PODER action, and she keeps singing it. This song has its roots in our struggles in the Americas, like in El Salvador.

I always wanted to go to college. I went to City College then (San Francisco) State (University) and studied psychology. All because my friends were supporting me, encouraging me. I found great people here. Through history lessons and friends I became aware of why I was here, why I had to leave my culture and my family, and why people were fighting.

I started to do some organizing here, little fundraisers, to bring supplies to small towns in the east of El Salvador affected by war. I accompanied some delegations with refugiados going back to El Salvador after the war. I realized that many small changes together become big changes when we all do it together.

I’m really glad to have found PODER, it feels like a home to me, a family. I love how PODER is so tied to people, so sensitive, and so political. I love it.

I am almost 20 years old. It’s my second year at San Francisco State (SFSU). My major is going to be health education with an emphasis in community health. I’m also a tutor at Cleveland Elementary School, and I’m a youth commissioner for the City.

I was born and raised here in San Francisco as the first generation of Salvadoran immigrants.

I started getting interested in community organizing because of my parents, their background. I was curious. I wanted to know more about their struggle, their country. It motivated me. It made me understand and become more socially and politically aware of what’s going on in the world. That’s what got me interested in social justice issues.

It’s so special (at PODER) to have the connections between generations because in society we sometimes don’t get to connect to our elders. I’ve been part of Common Roots for two summers, and I really like the projects that we work on with the youth. It was just awesome going to New Mexico this past summer. It changed me a lot. I learned about indigenous traditions and how to connect to Mother Earth. It was just beautiful. I didn’t want to come back.

In college and through PODER, I learned a lot about community health and organizing, and the issues we need to work on. In terms of here in the US, we have to fight for more equality and equity for people of color. I’ve decided to dedicate myself to that. That’s what my passion is. I plan to go to law school. I want to become an environmental justice lawyer.

I’m six and a half years old and I’m in first grade. I like to have play-dates with my best friend. Her name is Nabori. My favorite colors are red, black, and purple. I like to play bingo. I like my new bed. I know how to spell it, B-E-D.  It’s warm. Hablo español y inglés tambien. Los dos. I also learned some Chinese. I know how to count one to ten in Chinese. I like to have classes in my school. I would invent coco ice cream with marshmallows on top. My super power is that I can breathe under water for a long time. My favorite food is pepino con limón y sal, or elote con limón y sal (cucumber with lemon and salt or corn on the cob with lemon and salt).

I love movie nights at PODER!