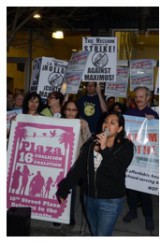 Marilyn Duran joined PODER at the age of 14.  As a member of the Common Roots Youth Organizer Program, Marilyn learned about the environmental injustices low-income communities of color face and displacement crisis that has afflicted the Mission.  Her own family has avoided eviction because of Marilyn becoming informed, active and supported as an emerging young leader.  Marilyn has taken on numerous leadership roles within PODER.  As Marilyn states, “PODER constantly widens my perspective on issues and solutions for our communities.”

In 2006, Marilyn was a Grassroots Global Justice Alliance delegate to the World Social Forum in Nairobi, Kenya.  And in 2009, Marilyn was PODER’s representative on the Southwest Network for Environmental and Economic Justice’s Youth Leadership Campaign.  In this role, she trained other youth to organize and build a movement for environmental justice throughout the southwest and northern Mexico.

According to Marilyn, “As a Just Transition Fellow, I learned even more about what PODER does for not only the San Francisco community, but as an example for others nationwide.” She continued, “The solutions of cooperatives in our communities, specifically the farm with the Urban Campesinos and Bicis del Pueblo have inspired others in different cities to do similar projects. It was eye-opening to see how much influence PODER has on so many people.”

For more than a decade PODER has supported Marilyn’s transformation into a valuable community leader.