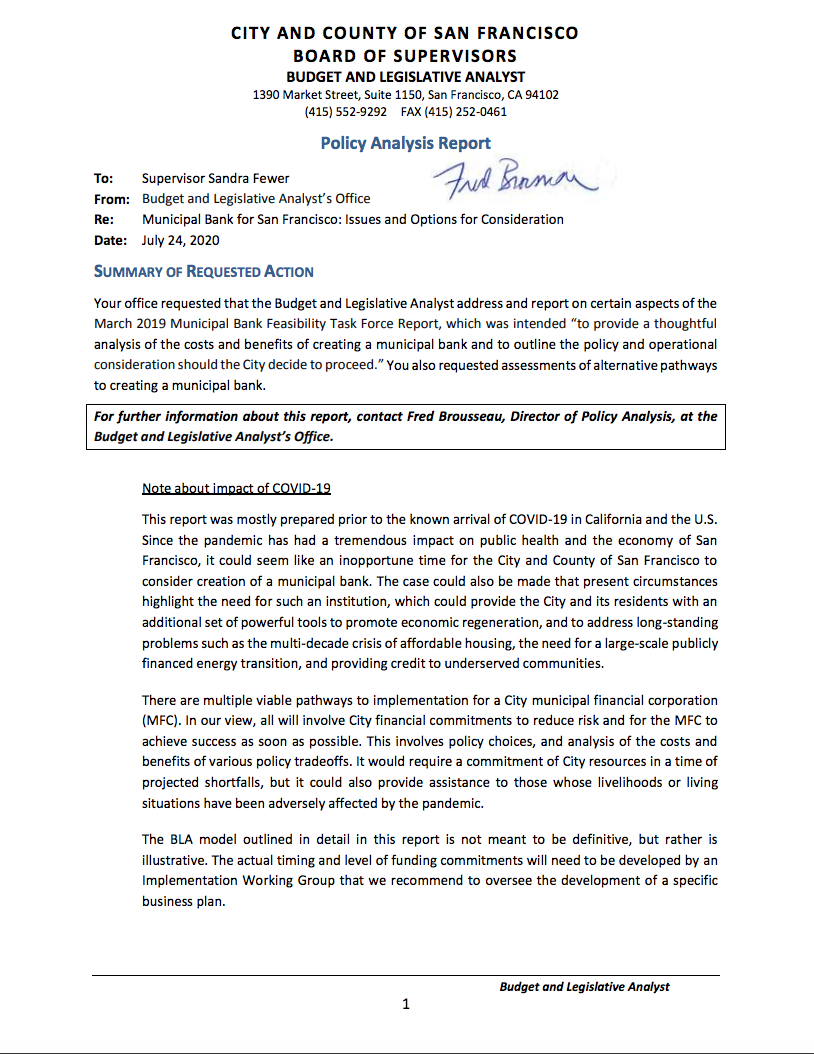 email
***PRESS RELEASE***
San Francisco Budget and Legislative Analyst Urges City to Develop Plan for a Public Bank
City report highlights need for public bank to open the door to rapid, sustainable, and equitable recovery during the COVID-19 crisis and to invest in long-standing needs such as affordable housing, small business, and green infrastructure

SAN FRANCISCO — A report released by the City of San Francisco’s Budget and Legislative Analyst (BLA) Office on public banking recommends that the City immediately set up a Working Group to develop a business plan for a San Francisco public bank, which will address capitalization, funding, lending operations, and governance to be submitted to the Board. This report was first requested by District 1 Supervisor Sandra Lee Fewer, who has been a champion of public banking since entering office in 2017.

“The Budget and Legislative Analyst report demonstrates clear and compelling reasons for moving forward with a plan to create a public bank in San Francisco,” said Supervisor Fewer. “Such an institution could invest in the rebuilding of our local economy to benefit San Franciscans. A public bank for the public good? Absolutely.”

The medium-term impact of the current economic recession could be addressed with the creation of a public bank by investing in affordable housing, public infrastructure, and small businesses. As the Budget and Legislative Analyst office writes, “our present circumstances highlight ever more clearly the need for such an institution, which could provide the City and its residents with an additional set of powerful tools to promote economic regeneration, and to address long-standing problems such as the multi-decade crisis of affordable housing and the need for a large-scale publicly financed energy transition.”

“The COVID-19 crisis has plunged communities that were already struggling into further poverty and homelessness,” said Reina Tello, community organizer at PODER. “This report reveals what we already knew to be true: A public bank in San Francisco will provide an economic lifeline to San Franciscans for years to come. We can invest in what our people need, such as financing affordable housing, investing in small businesses, and building an economy that meets peoples’ needs.”

The report can be viewed in full here.